The Kitronik Inventor's Kit for the BBC micro:bit is a popular product for learning how to connect external components and use the BBC micro:bit as a controlling device. The kit contains all the components you need to complete 12 experiments building circuits using LEDs, motors, light sensors and capacitors.  The micro:bit program required to make each experiment work can be created using the Mr Bit ‘Plain English’ method.  The ready-made files below offer solutions for each experiment.  They may be downloaded directly into Insight Mr Bit.

1 - Say Hello to the BBC micro:bit

Two buttons on the breakout board duplicate the action of the onboard buttons A and B.

The program creates displays on the LEDs when the buttons are pressed: One button shows a smiley face image, the other shows the message “Hello”.

An LDR (Light Dependent Resistor) is connected in series with a resistor to make a potential divider which creates a voltage that varies with the amount of light shining on the LDR, thus indicating ‘light level’.  Connecting the voltage to one of the input pins allows the micro:bit to control the LED display to show a different image for bright and dark.

Download notes about the Mr Bit programs for the experiments

3 - Dimming an LED using a Potentiometer

A potentiometer provides an input voltage which can be varied as you turn the control spindle. This voltage is used to alter the brightness of an LED when it is turned on by pressing button A.  The higher the voltage from the potentiometer the brighter the LED shines.

4 - Using a Transistor to Drive a Motor

The amount of current available from the output pins of the micro:bit is nowhere near large enough to activate a small electric motor.  The problem is solved by connecting a transistor to the output and using the tiny current to the transistor to control a much bigger current through the motor.

6 - Setting the Tone with a Piezo Sounder

Wind turbines contain a dynamo which converts the kinetic energy of air into electrical energy. In this experiment the motor is used in reverse like a dynamo to generate a voltage which can be measured and displayed by the BBC micro:bit.

8 - Making a Game using the Compass

The BBC micro:bit comes with a built in compass so it can tell which way is north. It does this using a chip that is very sensitive to magnetism and can detect earth’s magnetic field. In this game a secret compass heading is selected randomly and an LED blinks faster or slower depending on how close to the correct heading the BBC micro:bit is facing.

An RGB LED is a special LED that contains three separate LEDs (Red, Green and Blue) in one capsule. By controlling the brightness of these LEDs, their light mixes together to create many different colours.

The Traffic control program lights the red, yellow and green LEDs in the UK traffic light sequence when button A gets pressed.  When the Red LED is on, pedestrian light changes from red to green and the buzzer bleeps.

The marking on the six faces of a die are here represented by seven LEDs arranged in the usual pattern on the breadboard.  The throw of the die is simulated by pressing button which generates a random number from 1 to 6. 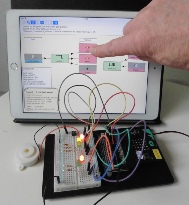 Have fun connecting sensors and LEDs to your micro:bit.